You only need to turn on the news to get a scare nowadays, but as the big night approaches, we’ve taken a look into whether the current socio-economic challenges in society forecast a frightening result, or whether our sweet tooth will scare those ghouls away.

The UK is expected to spend a total of £687 million this Halloween (Finder), with 85% of that spend being attributed to parents with children under the age of five (Beam).

From decorations and costumes to sweet treats and horror movies – we love to embrace the seasonality and welcome in the start of those darker nights.

Typically, the buzz for Halloween starts weeks in advance – and whilst blurred with the introduction of Christmas goodies filling the shelves, around 40% of all the money being spent over the Halloween period is spent on sweets (Mintel). A whopping £28.95 million will also be spent this year on pumpkins – 15% higher than in 2021 (Finder), and on average costing you 22p more than they did last year, shocker!

Love it or hate it, you find yourself involved. Around 80% of the UK population buys sweet treats to hand out to trick-or-treater’s (Savvy) – although we’d love to know the percentage of consumers who purchase them with good intentions, but actually never open their door and simply keep them to themselves!

Fun size SKUs, sharing bags and tubs are the most popular Halloween consumable purchases, and following the wake of the COVID-19 pandemic, 86% of consumers state that they would prefer individually wrapped treats for hygiene reasons (The Grocer). 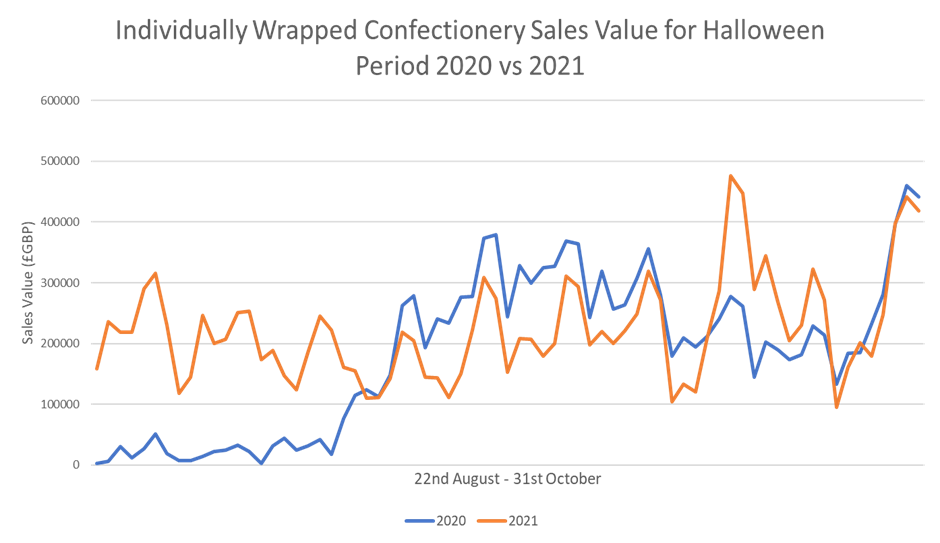 Not only that, but with the recent introduction of HFSS regulations, increased demand has been seen for healthier options during these festive periods, with 15% of consumers actively looking for healthier alternatives to give-out and consume during this spooky season.

In the 10 weeks preceding Halloween 2021, sales values were up 2.5% year-on-year in the confectionary and baked categories, which followed a 6.9% rise during the same period in 2020. This year-on-year increase however was likely due to the rising costs of these items, as sales volumes in the same period had actually declined by 3.1%.

HFSS restrictions, put in place on 1st October 2022, restricting both where and how these high fat, sugar and salt products can be displayed in stores are causing restrictions to the positioning and promotion of these highly desired products during this time of the year. As a result, only a quarter of retailers commented that they would give Halloween an extra focus, compared to 44% in 2021.

There is a fear, amongst retailers, of left-over Halloween products falling into November, with food prices reaching a 13 year high and with the added pressure of the cost-of-living crisis impacting consumers from all angles. This Halloween period will be a telling sign of what might be expected for sales in the run up to the World Cup and Christmas period.

Data has shown that Halloween sweet sales increased by 27% over the Halloween period last year, with this expecting to increase further this year due to no COVID-19 restrictions.

What are the consumers saying?

A recent survey from The Grocer of 250 consumers found that they were less enthusiastic about Halloween 2022 than the previous year.

It’s also predicted that with Halloween falling on a Monday, retailers will capitalise on sales for the weekend preceding the day itself.

With schools out for Half Term across Wales this week – retailers across the country will be hoping that the celebrations and festivities extend into the week to help them clear as much stock as possible before the real World Cup and Christmas drive begins. 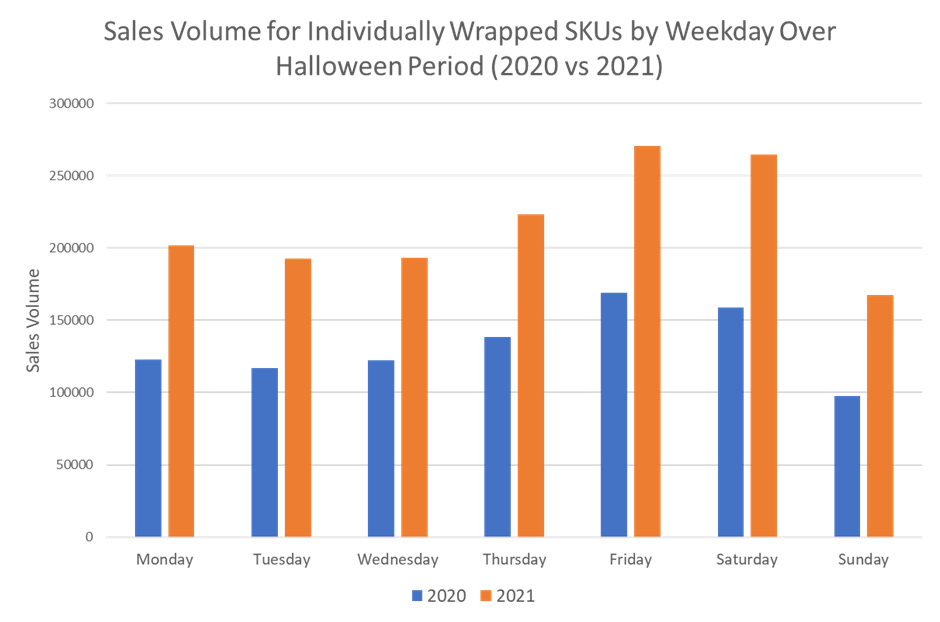 Let’s have a chat to see how
we can work together.

You can find out more about which cookies we are using or switch them off in settings.

This website uses cookies so that we can provide you with the best user experience possible. Cookie information is stored in your browser and performs functions such as recognising you when you return to our website and helping our team to understand which sections of the website you find most interesting and useful.

Strictly Necessary Cookie should be enabled at all times so that we can save your preferences for cookie settings.

If you disable this cookie, we will not be able to save your preferences. This means that every time you visit this website you will need to enable or disable cookies again.

This website uses Google Analytics to collect anonymous information such as the number of visitors to the site, and the most popular pages.

Please enable Strictly Necessary Cookies first so that we can save your preferences!